In my previous blog posts I described attack campaigns targeting Indian government organizations, and  Indian Embassies and Ministry of External affairs. In this blog post I describe a new attack campaign where cyber espionage group targeted the users of Mazagon Dock Shipbuilders Limited (also called as ship builder to the nation). Mazagon Dock Shipbuilders Limited (MDL) is a Public Sector Undertaking of Government of India (Ministry of Defence) and it specializes in manufacturing warships and submarines for the Indian Navy.

In order to infect the users associated with Mazagon Dock Shipbuilders Limited (MDL), the attackers distributed spear-phishing emails containing malicious excel file which when opened drops a malware capable of spying on infected systems. The email purported to have been sent from legitimate email ids. The attackers spoofed the email id associated with a Spain based equipment manufacturing company Hidrofersa which specializes in designing, manufacturing naval, industrial and mining machinery.

Overview of the Malicious Emails

On 25th January (day before the Republic day) attackers spoofed an email id associated with Hidrofersa a Spain based company which specializes in designing, manufacturing naval, industrial and mining machinery and the email was sent to the users of Mazagon Dock Shipbuilders Limited (MDL). The email attachment contained two malicious excel files (both excel files turned out to be same but used different names). The email was made to look like it was sent by a General service manager of Hidrofersa enquiring about the product delivery schedule.

Below screen shot shows the recipients associated with Mazagon Dock Shipbuilders Limited (MDL), this information was determined from the Email header.

Mazagon Dock Shipbuilders Limited (MDL) is listed as one of clients of Hidrofersa  (mentioned in Hidrofersa website) and as per their website Hidrofersa has shipped equipments to Mazagon Dock Shipbuilders Limited (MDL) in the past as shown in the below screen shots. This is probably the reason attackers spoofed the email id of Hidrofersa as it is less likely to trigger any suspicion and there is high chance of recipients opening the attachment as it is coming from a trusted equipment manufacturer (Hidrofersa) . It looks like attackers carefully researched (or they already knew about) the trust relationship between these two companies.

From the email it looks like the goal of the attackers was to infect, take control of the systems of users associated with Mazagon Dock Shipbuilders Limited (MDL) and to steal sensitive information (like Product design documents, blueprints, manufacturing processes etc) related to warships and submarines.

When the recipient of the email opens the attached excel file it prompts the user to enable macro content and the excel also contains instruction on how to enable the macros. 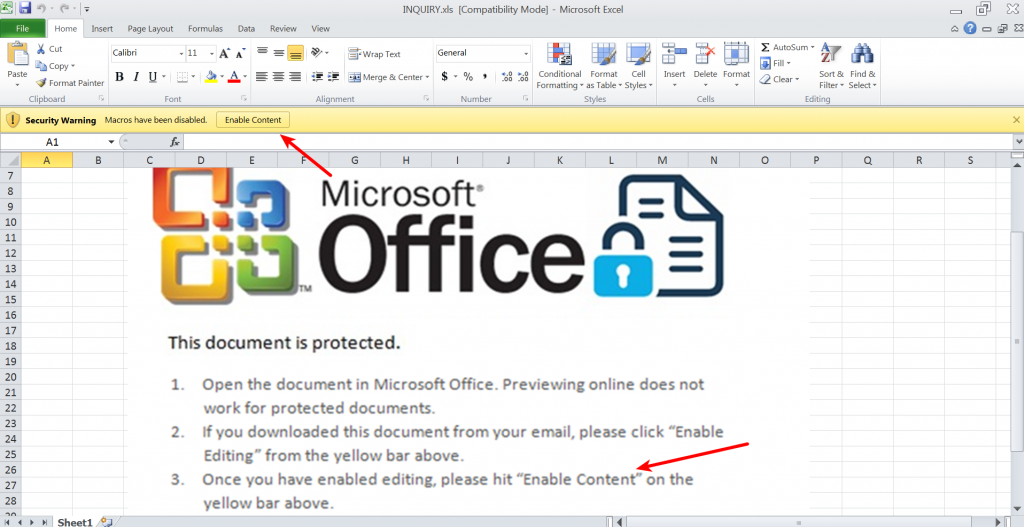 Once the the macro content is enabled, it calls an auto execute function Workbook_Open() which in turn downloads the malware sample and executes on the system. The malicious macro code was reverse engineered to understand its capabilities. The macro code was heavily obfuscated (used obscure variable/function names to make analysis harder) as shown below.

The macro also contained lot of junk code, unnecessary comments and variable assignments as shown below. The attackers used this technique to delay, divert and confuse the manual analysis.

The macro then decodes a string which runs PowerShell script to download malware from a popular university site located in Indonesia as shown below. The attackers probably compromised the university website to host the malware. The technique of hosting malicious code in a university site (legitimate site) has advantages and it is unlikely to trigger any suspicion in security monitoring and also can bypass reputation based devices. 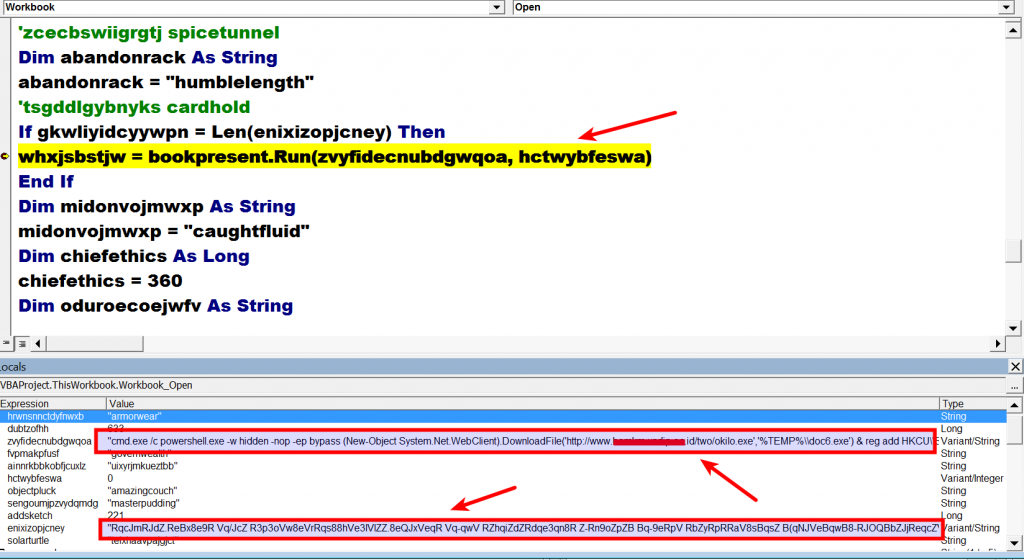 The PowerShell script (shown below) drops the downloaded executable in the %TEMP% directory as “doc6.exe“. It then adds a registry entry for the dropped executable and invokes eventvwr.exe, this is an interesting registry hijack technique which allows the doc6.exe to be executed by eventvwr.exe with high integrity level and also this technique silently bypasses the UAC (user account control). This technique of UAC bypass is mentioned in the blog  “Fileless” UAC Bypass Using eventvwr.exe and Registry Hijacking

In this case since this registry “HKCU\Software\Classes\mscfile\shell\open\command” was hijacked to contain the entry for “doc6.exe” , this will cause the eventvwr.exe process to invoke doc6.exe with high integrity level.

Below screen shot shows doc6.exe running from the %TEMP%  directory 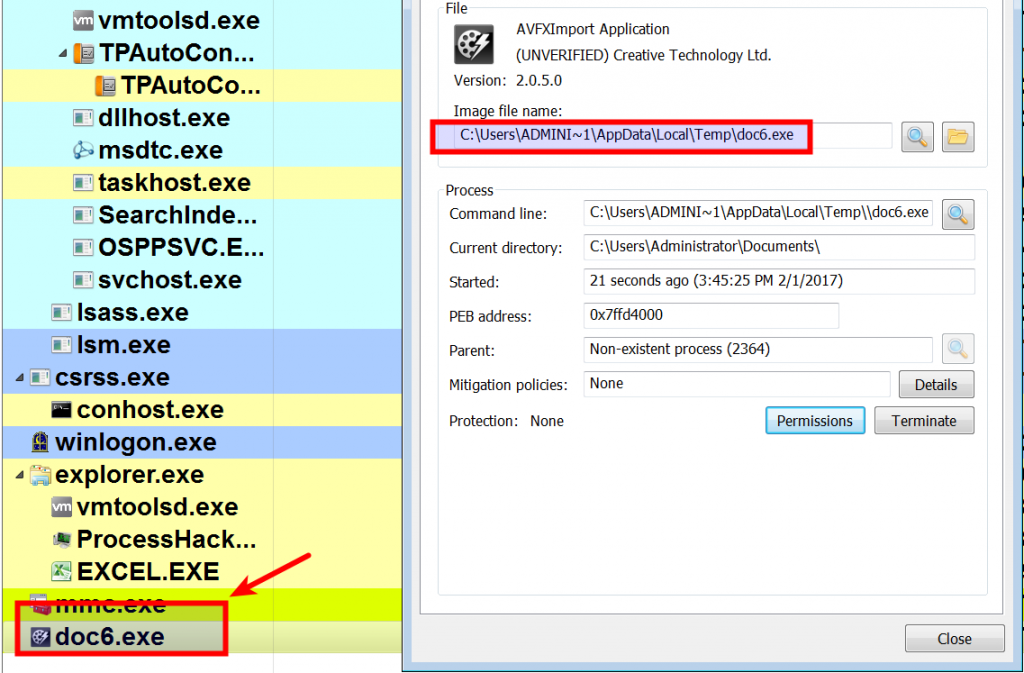 The dropped file (doc6.exe) was determined as KeyBase malware. This malware can steal and send sensitive information to the attackers like keystrokes, opened applications, web browsing history, usernames/passwords, upload Desktop screen shots etc. The feature of uploading the Desktop screen shot is notable because if the infected user opens a design or design document related to submarines or warships the screen shot of that can be sent to the attacker.

The attackers also hosted multiple samples of KeyBase malware in the compromised university website. Below screen shot shows hashes of 25 samples hosted on the university site.

Analysis of the Dropped Executable (doc6.exe)

The dropped file was analyzed in an isolated environment (without actually allowing it to connect to the c2 server). This section contains the behavioral analysis of the dropped executable

Once the dropped file (doc6.exe) is executed the malware copies itself into %AllUsersProfile% directory as “Important.exe”, In addition to that it also drops two files “Mails.txt” and “Browsers.txt” into the same directory as shown below.

The malware then creates a registry value for the the dropped file (Important.exe), this ensures that malware is executed every time the system restarts. 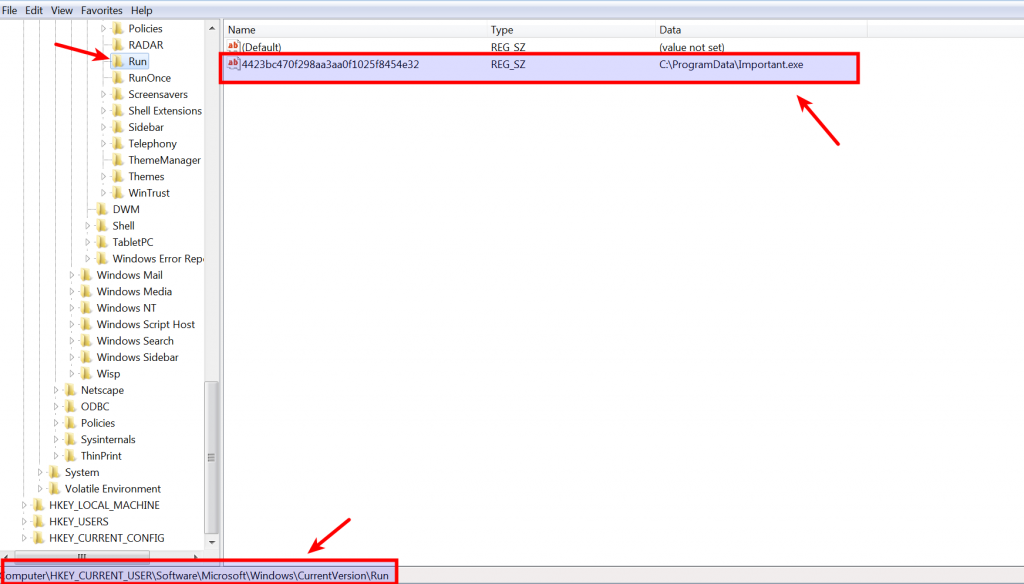 The malware after execution keeps track of the user activity (like applications opened, files opened etc) but does not immediately generate any network traffic, this is to make sure that no network activity is generated during automated/sandbox analysis. After sleeping for a long time malware makes an http connection to the C2 server (command & control server) and sends the tracked user activity to the attacker. The below screen shot shows the communication to the C2 server on port 80.

Once malware makes an http connection after sleeping for a long time, it sends the system information and the tracked activity to the C2 server as http parameters. Below screen shot shows the network communication pattern where the hostname and the machine time is sent to C2 server.

Below screen shot shows a network communication pattern where the opened window title was sent to the C2 server, this pattern below indicates that “test.txt” file was opened with notepad on the infected system. 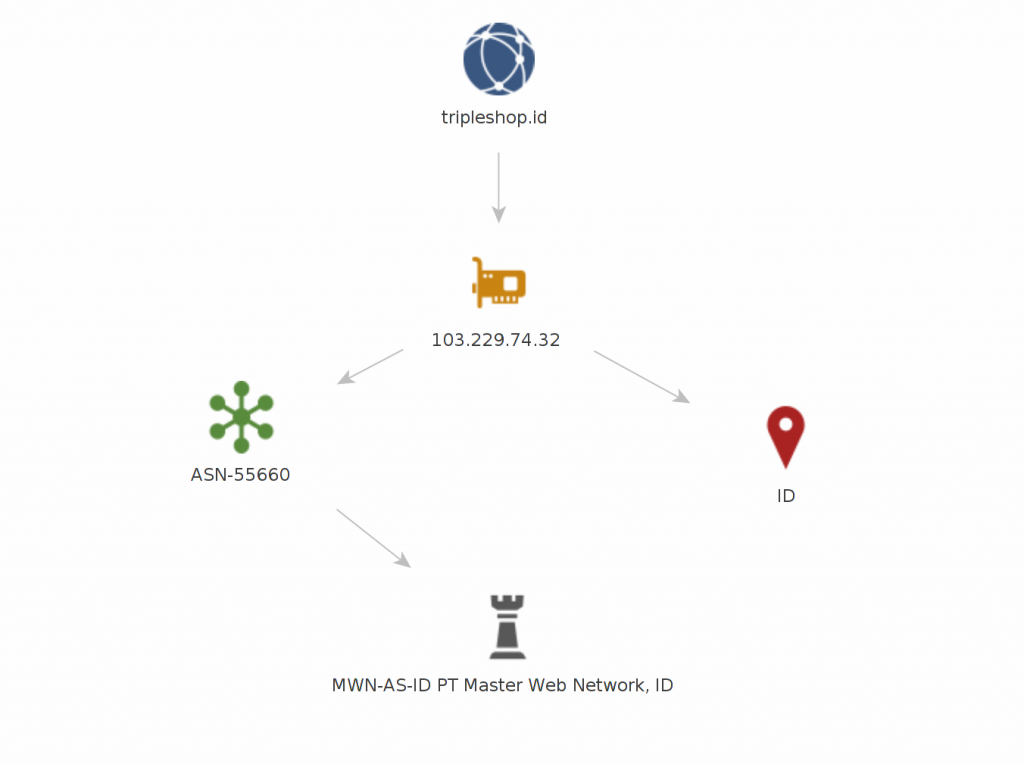 Below screen shot shows the timeline when the IP address was active. The IP was first seen to be active on 18th Jan, 2017 (one week before the spear-phishing mail was sent to the victims).

Even though attackers tried to make it look like the spear phishing email was sent by an email id associated with Hidrofersa but inspecting the email headers revealed some interesting information.

The X-AuthUser in the header below revealed the identity of the sender. The sender is associated with a company named “Combined Freight (PVT) Limited” (combinedfreight[.]com)

Combined Freight (PVT) Limited is freight forwarding company which is into ocean & air freight business headquartered in Karachi, Pakistan (as per their website). This company has 4 other offices in Pakistan (Lahore, Islamabad, Sialkot, Faisalabad). Below is the screen shot taken from their website. 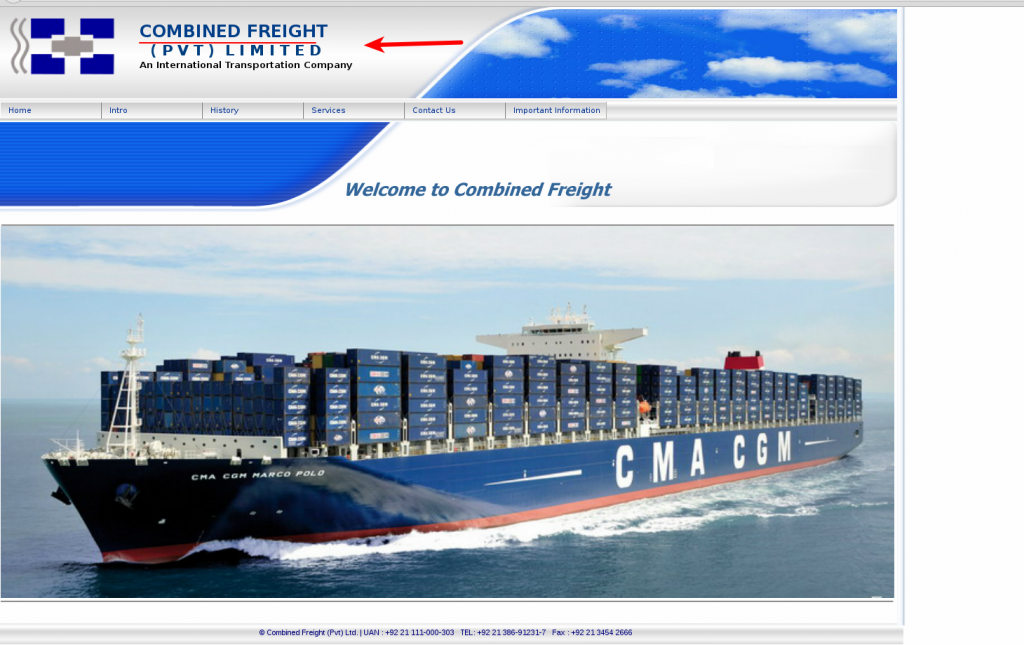 Based on the information mentioned above, It looks like the spoofed email was sent by a user associated with a Pakistan based company Combined Freight (PVT) Limited.

In this case the cyber espionage group targeted Mazagon Dock Shipbuilders Limited (MDL) but it is possible that other defense equipment manufacturers could also be targeted as part of this attack campaign. The indicators associated with this attack are provided so that the organizations (Government, Public, Private organizations, Defense and Defense equipment manufacturers) can use these indicators to detect, remediate and investigate this attack campaign. Below are the indicators

Attackers in this case made every attempt to launch a clever attack campaign by spoofing legitimate email ids and using an email theme relevant to the targets. The following factors in this cyber attack suggests the possible involvement of Pakistan state sponsored cyber espionage group to steal the intellectual property such as design/blueprints and manufacturing data related to submarines and warships.

The following factors reveal the attackers intention to remain stealthy and the attempt to evade sandbox analysis, manual analysis and security monitoring at both the desktop and network levels.