Skip to content
This blog post contains the details of detecting the encrypted Gh0st RAT communication, decrypting it and finding malicious Gh0st Rat artifacts (like process, network connections and DLL) in memory. I also present a Volatility (Advanced Memory Forensics Framework) plugin (ghostrat) which detects the encrypted Gh0st RAT communication, decrypts it and also automatically identifies the malicious Gh0st RAT process, its associated network connections and the loaded DLL’s. This can help the digital forensic investigators and incident responders to quickly narrow down on the Gh0st RAT artifacts without having to spend time on the manual investigation.
1. Introduction
Gh0st RAT is a Remote Access Trojan used in many cyber espionage/targeted attacks like “Gh0stnet” which was targeted against compromise of computer systems owned by the Private Office of the Dalai Lama, and several other Tibetan enterprises. Gh0st RAT was also used to attack large corporations in the oil and gas industry dubbed as “Operation Night Dragon” by McAfee. This malware has multiple capabilities which allows the attackers to take control of the infected machine some of them include screen control, keystroke logging, webcam eavesdropping, voice monitoring, and remote file downloads. More details of this malware can be found in this whitepaper titled “Know Your Digital Enemy”
When a host is infected with Gh0st RAT, the malware collects the system information, encrypts the collected information and sends it to the C2 (command and control) server. In this blog I will show how this communication takes place and how this communication can be detected and decrypted in memory using a Volatility plugin.
2. Network Communications of Gh0stRat
An example of Gh0st RAT traffic communication is shown below, this traffic contains 13 byte header, the first 5 bytes (called the  Magic header) is a keyword in clear text like ‘Gh0st’ and the rest of the bytes are encoded using zlib compression algorithm (marked in green). Different variants use different magic headers and some variants use more than 5 byte magic headers

Below screenshot shows the ghostrat Volatility plugin. This plugin can be downloaded from GitHub or from Volatility Plugin Contest 2014.

In order to demonstrate the capabilities of the plugin, I analyzed multiple variants of Gh0stRat samples in the sandbox and collected the pcap and the memory image. The below screenshot show the pcaps and the memory (.vmem files) images of three different Gh0stRat samples. The First two samples were run on Windows XP SP3 and third sample was run on Win7SP0x86

The below screenshot shows the Gh0stRat communication. In this case the infected host 192.168.1.100 (which is the Windows XP machine where the sample was run) is sending the encrypted traffic to C2 (192.168.1.2 which is my Linux machine acting as C2) on port 2011, also in this case the magic keyword “Gh0st” was sent in the first 5 bytes

After running the plugin against the memory image (Gh0st.vmem), it detected the encrypted traffic in the memory and decrypted it, it also detected malicious process as svchost.exe process (with pid 408).
In the Decrypted traffic shown below, the system information is passed to the command and control server. The value shown in blue (05 00 00 00) which should be read as 00 00 00 05 (because of the little endian) format is the major version of the operating system which is 5.
The value shown in green (01 00 00 00) should be read as 00 00 00 01 is the minor version of the Operating system which is 1. So looking at these two values we can tell which OS was infected. In this case it is 5.1 which is Windows XP
The values shown in yellow (28 0a 00 00) should be read as 00 00 0a 28 is the build number of the operating system which in decimal is 2600. This is the build number of windows XP.
From the decrypted communication it can be seen that the Service Pack (service pack 3) and the Hostname (in this case it is “myhostname”) of the infected machine is also passed to the attacker

The Volatility plugin was able to automatically detect svchost.exe (with pid 408) as the malicious process, The plugin also detected malicious network communication associated with svchost.exe (with pid 408).  The below screenshot also shows the connection to the IP 192.168.1.2 on port 2011( this is the same traffic captured in the pcap). This can help the investigators to quickly determine the C2 ip involved in the compromise. 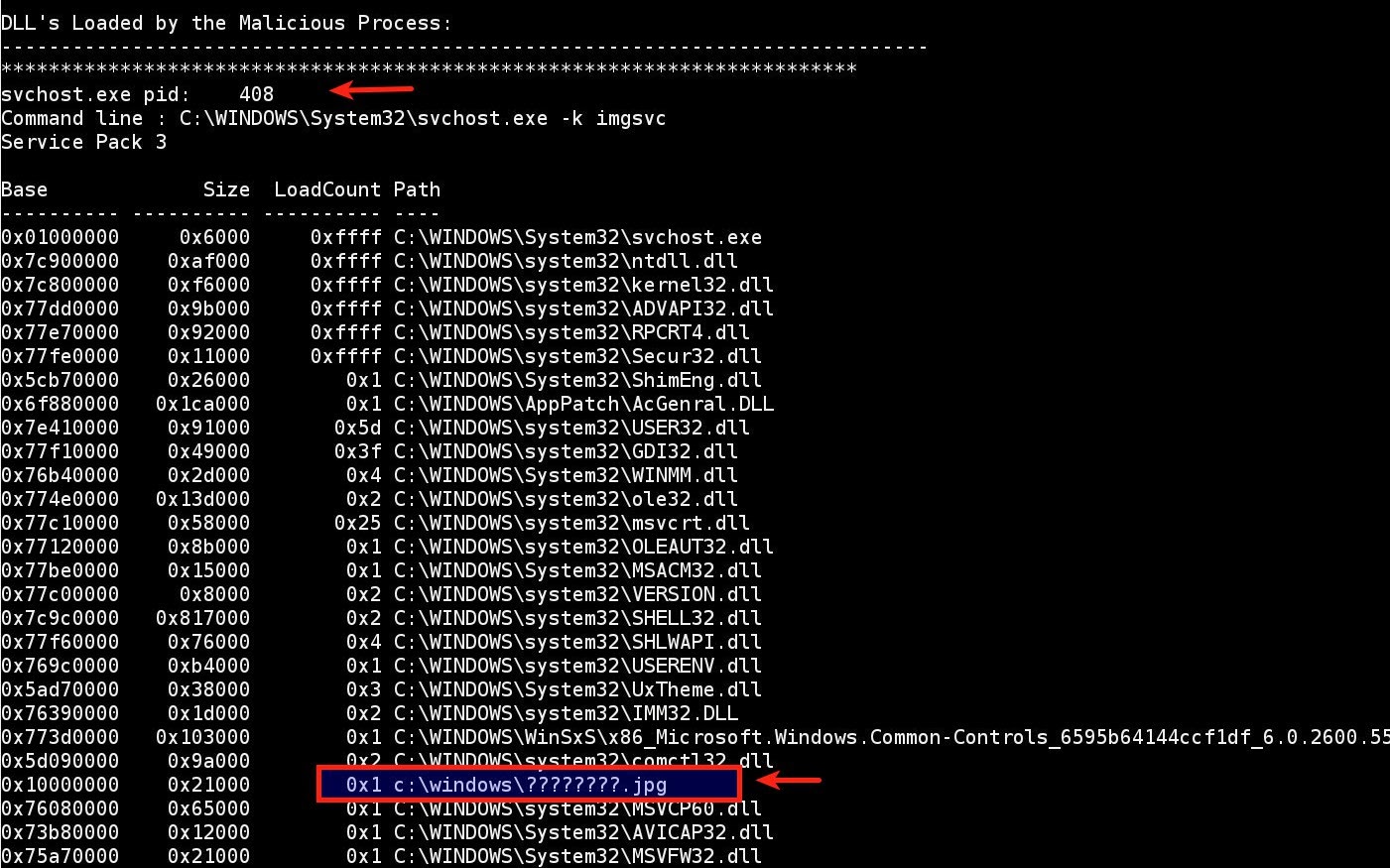 After dumping this suspicious file from memory and submitting to VirusTotal, Antivirus vendors detect this as (Magania/Farfli) which is same as Gh0strat. 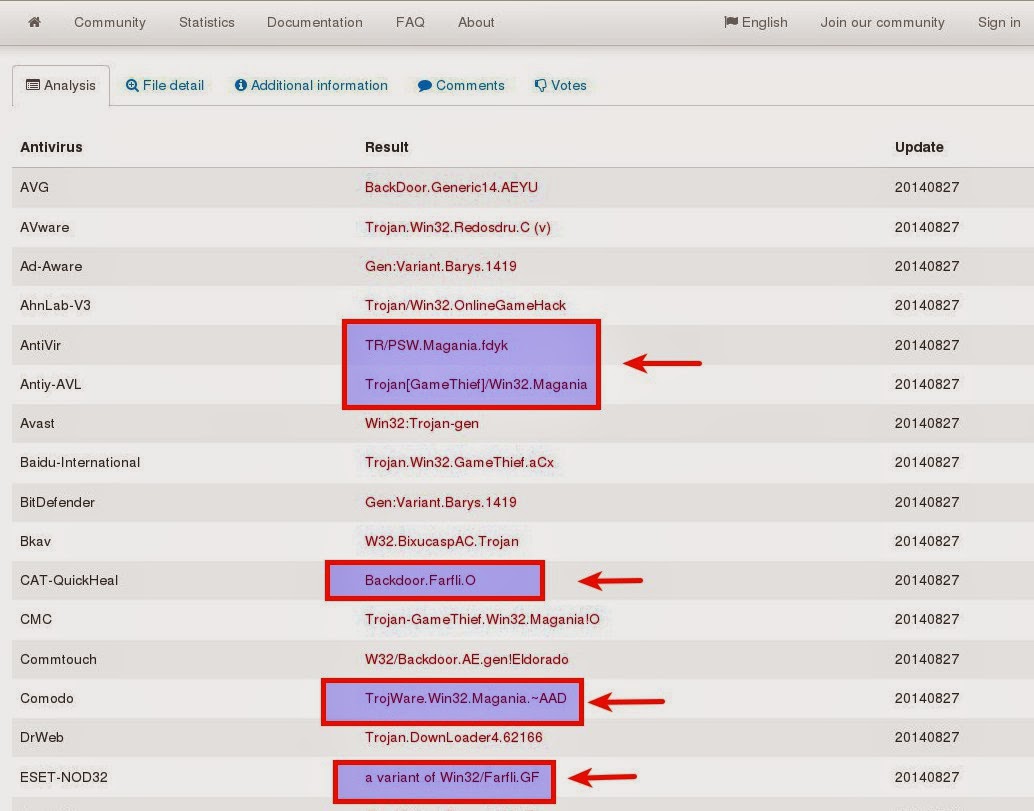 The below screenshot shows the Gh0stRat communication with 192.168.1.2 on port 2013, in this case the magic keyword “HEART” was sent in the first 5 bytes

After running the plugin against the memory image (HEART.vmem), it detected the encrypted traffic in the memory and decrypted it, it also detected malicious process as Garss.exe process (with pid 124). 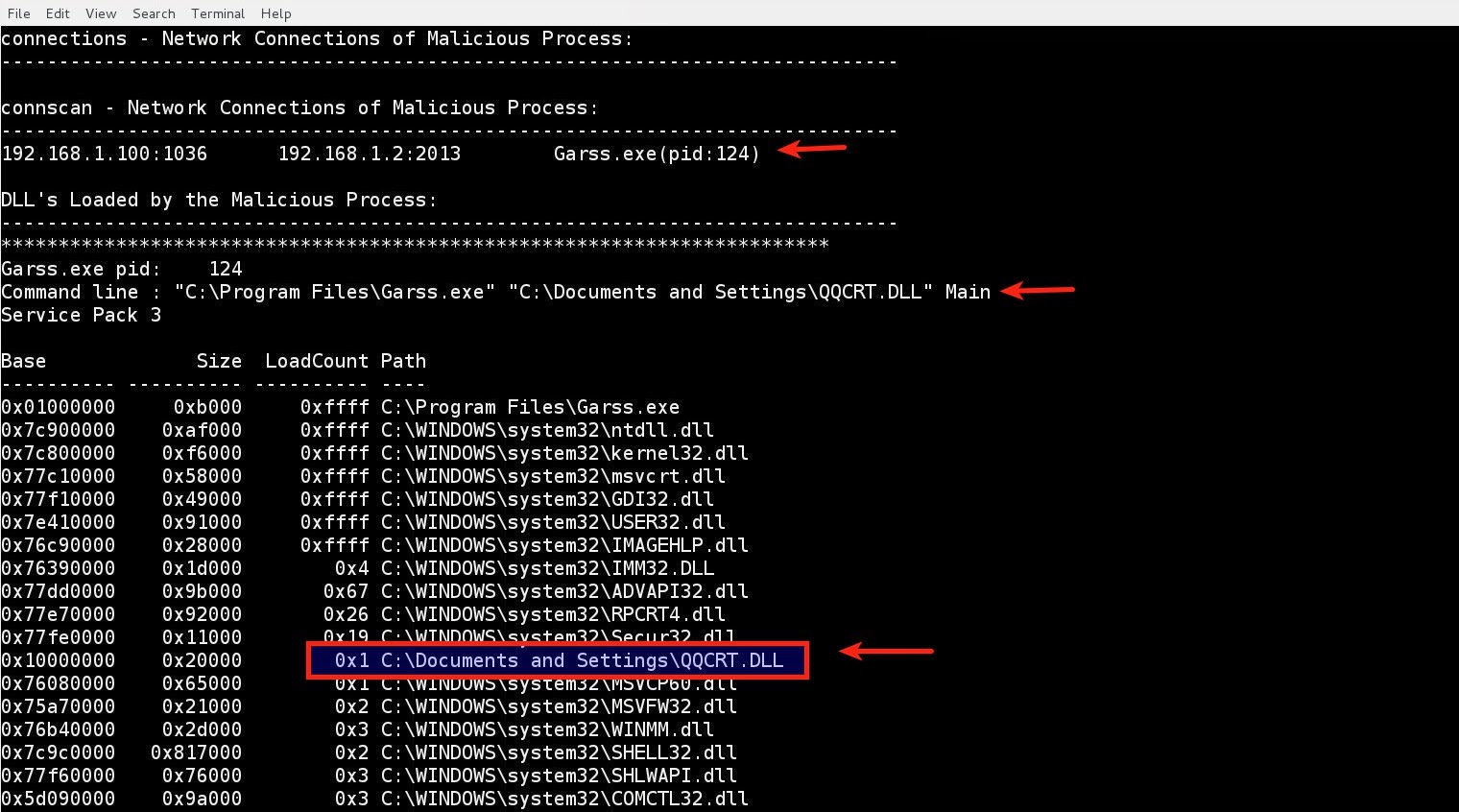 6.3. Investigating the Third sample – Windows7 image (win7_cb1st.vmem and win7_cb1st.pcap)
The below screenshot shows the Gh0stRat communication with 192.168.1.3 on port 8000, in this case the magic keyword “cb1st” was sent in the first 5 bytes 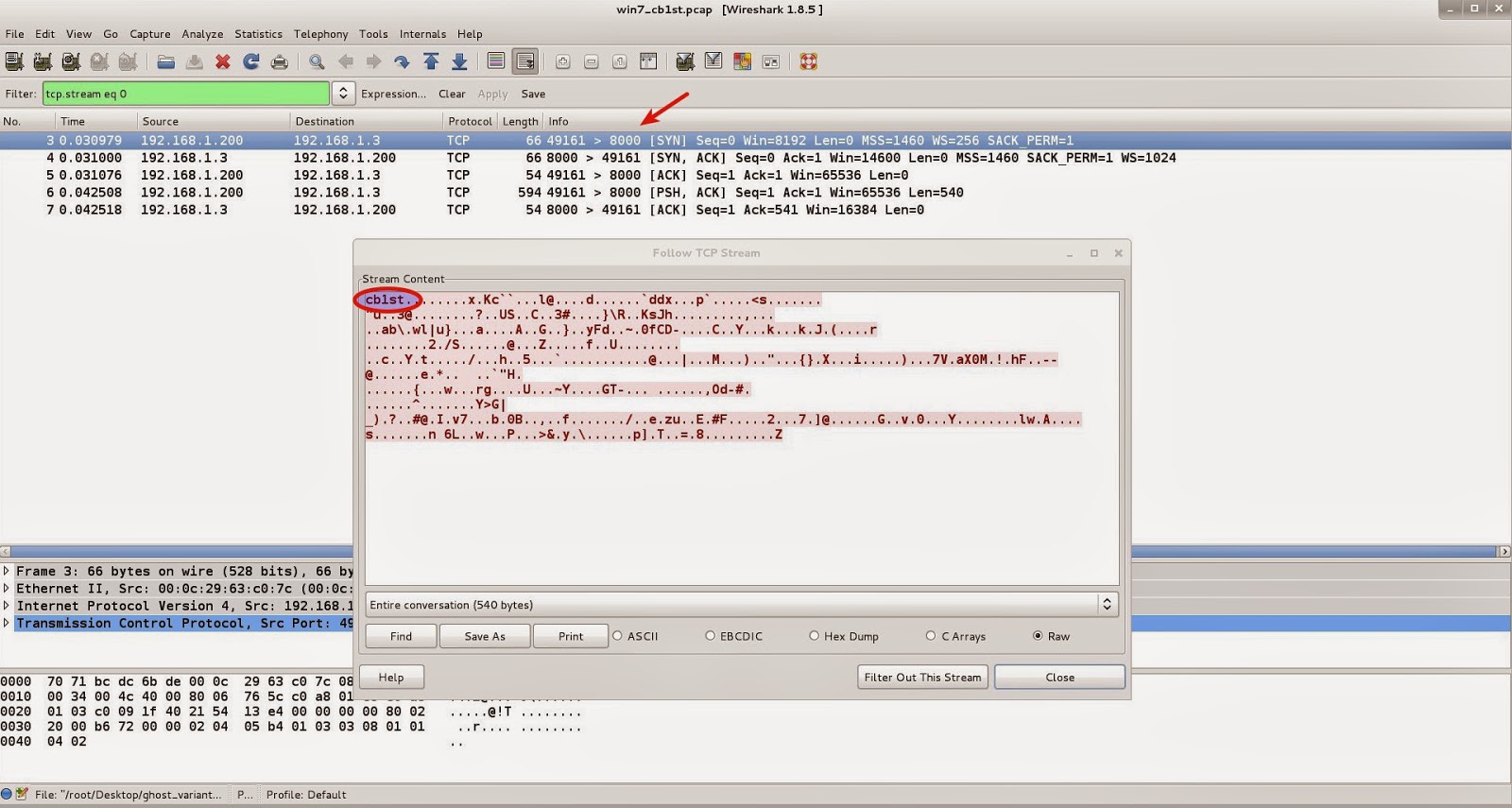 After running the plugin against the Windows 7 memory image (win7_cb1st.vmem), it detected the encrypted traffic in the memory and decrypted it, it also detected malicious process as svchost.exe process (with pid 840).  Based on the major, minor version and the build number ((highlighted in blue, green and yellow)  from the decrypted traffic it can be determined that the infected OS is Windows 7 and the hostname of the infected machine is “win7-sandbox”

Plugin also detected the malicious communication to the IP 192.168.1.3 on port 8000(that we saw in the pcap) which is associated with process svchost.exe (with pid 840). 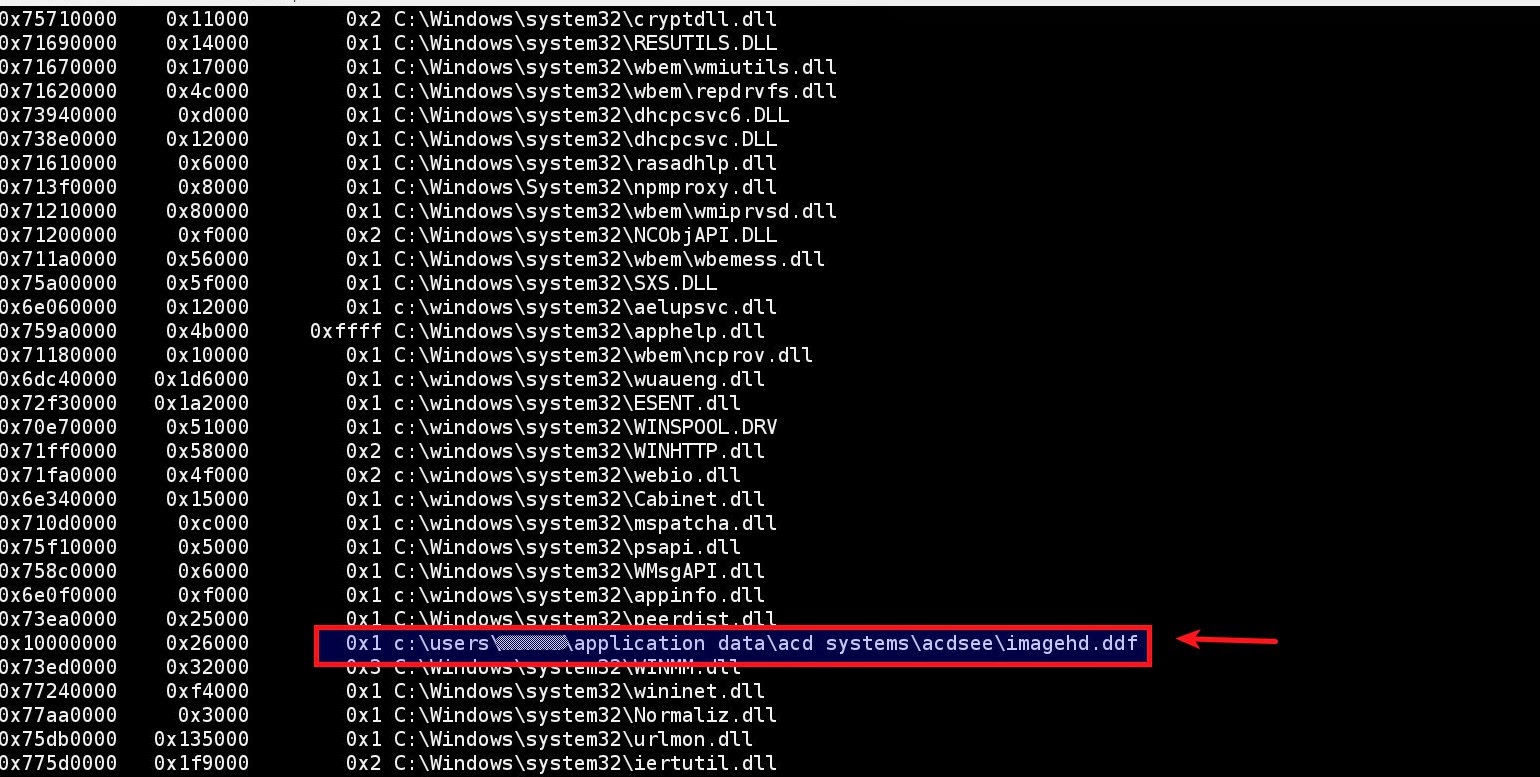 This blog post explained the details of Gh0stRat communication and showed the method to detect it manually using Volatility advanced memory forensics framework. I also presented a plugin that detects the malicious process, network communication, Loaded DLL’s and decrypts the network communication of multiple variants of Gh0stRat in an automated way. This allows the incident responders/Investigators to quickly detect the malicious Gh0stRat artifacts, C2 ip and it also helps in determining the type of information that was exchanged between the infected host and the C2 server.
Thanks to core developers of Volatility for their encouragement, for being an inspiration and for authoring one of the best books i have read last year and many years to come “The Art of Memory Forensics“: Michael Ligh (@iMHLv2), Andrew Case (@attrc), Jamie Levy (@gleeda) and Aaron Walters(@4tphi). Special thanks to Michael Ligh for going through my content and suggesting the changes (inspite of his busy schedule) and also for suggesting me to submit the plugin to the Volatility Plugin Contest 2014